Gold Plus Invisalign
Patient Forms Request an appointment Contact us

What’s going on with my teeth whitening? I’ve got these custom trays from my dentist which are supposed to fit all my teeth evenly. All of my teeth are whitening except one which looks really gray. I called my dentist’s office and they said to give it time. But it really does look weird. Can I buy a whitening strip and put it on just that tooth to give it some extra? 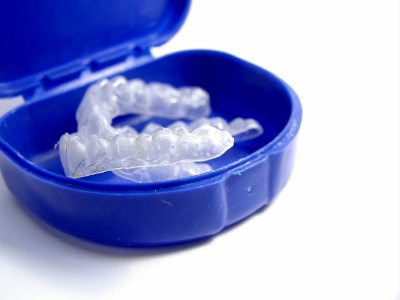 You’re correct that your teeth should be whitening evenly. The fact that they’re not, means one of two things.

It’s not a natural tooth

Even professional strength teeth whitening will only work on natural tooth structure. It may appear gray looking next to your natural teeth because they’re whitening and it’s not. Is it possible this tooth has a dental crown on it? If so, your dentist should have warned you that it wouldn’t whiten.

The tooth has been traumatized

A graying tooth is usually a sign the tooth has experienced trauma and is either dead or dying. In this case, it’s not whitening because it’s not stains that are the problem.

How to Whiten Your Gray Tooth

First, if it’s dead or dying, the tooth needs a root canal treatment. Otherwise, the problem will spread and you could lose the tooth to brittleness. You need to deal with this sooner rather than later. Tell your dentist you need an emergency dental appointment.

I have to tell you, though, I don’t have a great deal of confidence in your dentist. You may be better served going to a different one. The moment you told him that the teeth weren’t whitening evenly, especially with it being just one tooth, he should have clued in something is off. Telling you to give it time was the absolute worst advice you could have received.

Secondly, after your root canal treatment or if it’s a crowned tooth, the only way for it to get whiter is to replace the crown. If your other teeth have already reached the level of whitening you want then you can get it crowned immediately to match your new color. Be certain your dentist uses an all-porcelain crown and not a metal based one. The all-porcelain crowns are much more beautiful and natural looking.

If you still want to get your other teeth even whiter, finish your whitening treatment. When you get to the level of whiteness you want, then you can get your crown. There’s one exception to that. If you needed a root canal treatment, you’ll want a temporary crown placed so the graying tooth doesn’t disintegrate. Then, when you’re finished you can have a permanent crown placed.

This blog is brought to you by Kalamazoo cosmetic dentist Dr. Susan Dennis.