I had a root canal some time back. I wanted to have a CEREC crown placed on it, but my dentist didn’t have the machine. I was disappointed, but he’s been my dentist for years so I felt guilty considering going to someone else. I agreed to get the regular kind of crown. Though, he wanted to see how my tooth would do without a root canal first. We waited a couple of weeks and then I decided I’d rather not wait any longer. I had the temporary made and then went out of town on business. On the first day out, the temporary crown broke. I was going to be gone for over a week so I called my dental office. They told me it was no big deal and don’t stress over it, the tooth would be fine. But, by the time I returned to town and went to see them they told me the tooth couldn’t be saved. I was furious. If I’d gotten the crown sooner maybe this wouldn’t have happened. He said it wouldn’t have mattered, it was brittle from the root canal. Should I get a second opinion? Would I have saved the tooth if I’d gotten a CEREC? 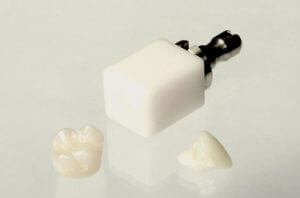 Yes, you should definitely get a second opinion. It’s always better to save a tooth whenever possible. Plus, there are some things your dentist is saying that doesn’t quite fit. Your tooth wouldn’t have been unsavable that quickly. It’s possible he’s covering for the fact that he didn’t take the care with you he should have. In addition to providing a crown sooner, he should have sent you to a dentist who sees non-established patients in the case of dental emergencies after your temporary crown broke, especially given how long you were going to be away. Even if your tooth can still be saved, it’s very likely your teeth have shifted and the permanent crown will no longer fit.

Hopefully, your second opinion dentist will tell you the tooth can be saved. Otherwise, you’re talking about also having to deal with a tooth extraction and researching tooth replacement options. If that does become necessary, I’d suggest you look into getting a dental implant. They’re much better than removable partial dentures. A dental bridge is okay, but it also means grinding down two other teeth. If they’re healthy, I don’t see the point. It’s much better to save whatever tooth structure can be saved.

It’s true, a CEREC crown would have prevented all of this to begin with. You would have had a crown the same day. But, there’s nothing that can be done about that now, unfortunately.

Hopefully, things will work out with a different dentist. Never stay with a dentist out of guilt. Either they can provide you with the care you need or they can’t. It’s your health, so don’t feel guilty.

This blog is brought to you by Emergency Dentist Dr. Susan Dennis of Michigan.