I noticed my husband has been babying his mouth. When I asked him what was wrong he said he thinks he jabbed his gum with something sharp and cut it. The next day, he was in obvious pain so I asked him to let me peek. When I did, it wasn’t a cut, but rather more like a bump. It looked like a pimple, but you don’t get those on gums, do you? Is it a big deal? He’s certainly in a lot of pain. 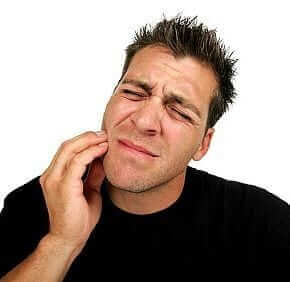 A pimple on your gums is a dental emergency

A pimple on your gums, or in this case your husband’s gums, is known as an abscess. This means he has a dental infection which has spread. What likely happened is your husband developed a cavity. Many times you can’t feel a cavity so he may have had no clue that decay was growing.

Either it was a fast-growing cavity or he has been neglecting his dental appointments so there was no x-rays or exam to give him a heads up. Whichever it was, at this point a simple filling would have taken care of things. Without that, it would continue to spread. Once it covers over 1/3 of the tooth a filling isn’t sufficient and he’d need a dental crown.

If he still doesn’t notice it or just ignores it, the decay will eventually reach the pulp of his tooth. He would definitely notice this. It’s quite painful. Once that happens, it would turn into an infection and need a root canal treatment to “cure” it. This is also the point where it would be considered a dental emergency. If he doesn’t have a regular dentist, he’d need to call an office who treats non-established patients in the case of an emergency. You can often find them by doing an internet search for an “emergency dentist”.

A pimple is what happens when the infection has no place else to go and is “spilling” out of the tooth.

The Importance of Dealing with Dental Emergencies

Too often patients think a dental infection can be treated like a bacterial infection they get elsewhere in their body. However, our mouths are a tad different. Once the infection reaches the pulp of the tooth, it causes it to die. That means no more blood flow can reach the area.

Even if you took an antibiotic, the most it could do was hold off the infection from the surrounding tissue where the medicine can reach. Then, once the antibiotic is gone the infection will return.

The only thing that will truly take care of the situation is for the dentist to get in there and physically remove the infected tissue. Hence the need for a root canal. Without that, the infection will run rampant. If you think about how close your jaw is to your heart and brain it could turn life-threatening rather quickly. In fact, every year people still die from tooth infections left untreated.

Don’t let your husband be one of them. Get him to the dentist.