I had a tooth which had to be extracted. From the beginning, I told my dentist I wanted a dental implant to replace the tooth, which he thought was a great idea as well. After the first surgery, he told me the bone was too thin and I’d need to have some bone grafting done. So, we scheduled and completed that surgery. Then, we went back in for the implant surgery again. For the second time, he closed everything up and said the bone is still too thin. I’m beyond frustrated. Would this have happened if I’d gone to a dental implant specialist? 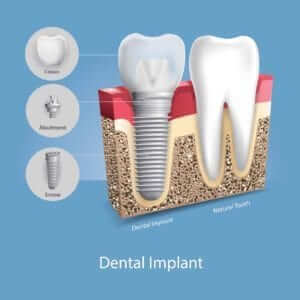 One of the problems you are facing is there isn’t a recognized specialty in dental implants. This means any dentist can place them. What you need, however, is someone who has invested significant training in this procedure. That training has to be done post doctorally. Dental school isn’t enough.

I’ll give your dentist credit for his integrity, though. Some dentists would have been too embarrassed to admit their procedure failed. Instead, they would have just moved forward and placed your dental implant. It would have failed after a few months, but by then there’d be no way to know it was your dentist’s fault. His integrity is saving you significant problems in the future.

Where to Go From Here

Your first option is to just do what your dentist is suggesting, which means getting a dental bridge. This is an acceptable solution, especially if you are sick of the whole process and want to get this over with.

Your second option is to try again for your dental implant. Ask your dentist for a refund. I get the feeling he’ll be totally willing to accommodate you there. Then, you’ll need to secure a dentist who is skilled in dental implants.

As I mentioned earlier, you’ll need someone who invested in the requisite training. For instance, Dr. Dennis received implant training and credentials from the 3i company. Other reputable institutions would be:

One important note. Many dentists refer you to an oral surgeon for the first part of the procedure. That is fine. In that case, just be certain it is the dentist who determines the placement of the implants and that there is good communication between the two of them.

This blog is brought to you by Cosmetic Dentist Dr. Susan Dennis.